One of Riak’s central goals is high availability. It was built as a clustered system in which any node is capable of receiving requests without requiring that every node participate in each request.

If you are using Riak in an eventually consistent way, conflicts between object values on different nodes is unavoidable. Often, Riak can resolve these conflicts on its own internally if you use causal context, i.e. vector clocks or dotted version vectors, when updating objects. Instructions on this can be found in the section below.

In versions of Riak prior to 2.0, vector clocks were the only causal context mechanism available in Riak, which changed with the introduction of dotted version vectors in 2.0. Please note that you may frequent find terminology in client library APIs, internal Riak documentation, and more that uses the term “vector clock” interchangeably with causal context in general. Riak’s HTTP API still uses a X-Riak-Vclock header, for example, even if you are using dotted version vectors.

But even when you use causal context, Riak cannot always decide which value is most causally recent, especially in cases involving concurrent updates to an object. So how does Riak behave when it can’t decide on a single most-up-to-date value? That is your choice. A full listing of available options can be found in the section below. For now, though, please bear in mind that we strongly recommend one of the following two options:

Because Riak allows for a mixed approach when storing and managing data, you can apply multiple conflict resolution strategies within a cluster.

In versions of Riak 2.0 and later, you have the option of using Riak in a strongly consistent fashion. This document pertains to usage of Riak as an eventually consistent system. If you’d like to use Riak’s strong consistency feature, please refer to the following documents:

Riak’s eventual consistency model is powerful because Riak is fundamentally non-opinionated about how data resolution takes place. While Riak does have a set of defaults, there are a variety of general approaches to conflict resolution that are available. In Riak, you can mix and match conflict resolution strategies at the bucket level, using bucket types. The most important bucket properties to consider when reasoning about conflict resolution are the allow_mult and last_write_wins properties.

These properties provide you with the following basic options:

The problem with timestamps is that they are not a reliable resolution mechanism in distributed systems, and they always bear the risk of data loss. A better yet still-problematic option is to adopt a last-write-wins strategy, described directly below.

Another way to manage conflicts is to set allow_mult to false, as with timestamp-based resolution, while also setting the last_write_wins parameter to true. This produces a so-called last-write-wins (LWW) strategy whereby Riak foregoes the use of all internal conflict resolution strategies when making writes, effectively disregarding all previous writes.

However, LWW can be useful—and safe—if you are certain that there will be no concurrent updates. If you are storing immutable data in which each object is guaranteed to have its own key or engaging in operations related to bulk loading, you should consider LWW.

Setting both allow_mult and last_write_wins to true necessarily leads to unpredictable behavior and should always be avoided.

Resolve Conflicts on the Application Side

Conflict resolution in Riak can be a complex business, but the presence of this variety of options means that requests to Riak can always be made in accordance with your data model(s), business needs, and use cases. For examples of client-side sibling resolution, see the following client-library-specific docs:

In Riak versions 2.0 and later, allow_mult is set to true by default for any bucket types that you create. This means that if you wish to avoid client-side sibling resolution, you have a few options:

When a value is stored in Riak, it is tagged with a piece of metadata called a causal context which establishes the object’s initial version. Causal context comes in one of two possible forms, depending on what value you set for dvv_enabled. If set to true, dotted version vectors will be used; if set to false (the default), vector clocks will be used.

Causal context essentially enables Riak to compare the different values of objects stored in Riak and to determine a number of important things about those values:

Using the information provided by causal context, Riak is frequently, though not always, able to resolve conflicts between values without producing siblings.

Both vector clocks and dotted version vectors are non human readable and look something like this:

If allow_mult is set to true, you should always use causal context when updating objects, unless you are certain that no object exists under that key. Failing to use causal context with mutable data, especially for objects that are frequently updated, can lead to sibling explosion, which can produce a variety of problems in your cluster. Fortunately, much of the work involved with using causal context is handled automatically by Riak’s official client libraries. Examples can be found for each client library in the Object Updates document.

A sibling is created when Riak is unable to resolve the canonical version of an object being stored, i.e. when Riak is presented with multiple possible values for an object and can’t figure out which one is most causally recent. The following scenarios can create sibling values inside of a single object:

Let’s have a more concrete look at how siblings work in Riak. First, we’ll create a bucket type called siblings_allowed with allow_mult set to true:

If the type has been activated, running the status command should return siblings_allowed is active. Now, we’ll create two objects and write both of them to the same key without first fetching the object (which obtains the causal context):

Getting started with Riak KV clients

If you are connecting to Riak using one of Riak’s official client libraries, you can find more information about getting started with your client in Developing with Riak KV: Getting Started section.

At this point, multiple objects have been stored in the same key without passing any causal context to Riak. Let’s see what happens if we try to read contents of the object:

Uh-oh! Siblings have been found. We should get this response:

As you can see, reading an object with sibling values will result in some form of “multiple choices” response (e.g. 300 Multiple Choices in HTTP). If you’re using the HTTP interface and want to view all sibling values, you can attach an Accept: multipart/mixed header to your request:

If you select the first of the two siblings and retrieve its value, you should see Ren and not Stimpy.

Once you are presented with multiple options for a single value, you must determine the correct value. In an application, this can be done either in an automatic fashion, using a use case-specific resolver, or by presenting the conflicting objects to the end user. For more information on application-side conflict resolution, see our client-library-specific documentation for the following languages:

We won’t deal with conflict resolution in this section. Instead, we’ll focus on how to use causal context.

After having written several objects to Riak in the section above, we have values in our object: Ren and Stimpy. But let’s say that we decide that Stimpy is the correct value based on our application’s use case. In order to resolve the conflict, we need to do three things:

What happens when we fetch the object first, prior to the update, is that the object handled by the client has a causal context attached. At that point, we can modify the object’s value, and when we write the object back to Riak, the causal context will automatically be attached to it. Let’s see what that looks like in practice:

It should be noted that it is possible to have two clients that are simultaneously engaging in conflict resolution. To avoid a pathological divergence, you should be sure to limit the number of reconciliations and fail once that limit has been exceeded.

Sibling explosion occurs when an object rapidly collects siblings without being reconciled. This can lead to myriad issues. Having an enormous object in your node can cause reads of that object to crash the entire node. Other issues include increased cluster latency as the object is replicated and out-of-memory errors.

Besides sibling explosion, the vector clock itself can grow extremely large when a significant volume of updates are performed on a single object in a small period of time. While updating a single object extremely frequently is not recommended, you can tune Riak’s vector clock pruning to prevent vector clocks from growing too large too quickly. More on pruning in the section below.

How does last_write_wins affect resolution?

On the surface, it seems like setting allow_mult to false (the default) and last_write_wins to true would result in the same behavior, but there is a subtle distinction.

Even though both settings return only one value to the client, setting allow_mult to false still uses vector clocks for resolution, whereas if last_write_wins is true, Riak reads the timestamp to determine the latest version. Deeper in the system, if allow_mult is false, Riak will still allow siblings to exist when they are created (via concurrent writes or network partitions), whereas setting last_write_wins to true means that Riak will overwrite the value with the one that has the later timestamp.

When you don’t care about sibling creation, setting allow_mult to false has the least surprising behavior: you get the latest value, but network partitions are handled gracefully. However, for cases in which keys are rewritten often (and quickly) and the new value isn’t necessarily dependent on the old value, last_write_wins will provide better performance. Some use cases where you might want to use last_write_wins include caching, session storage, and insert-only (no updates).

The combination of setting both the allow_mult and last_write_wins properties to true leads to undefined behavior and should not be used.

Riak regularly prunes vector clocks to prevent overgrowth based on four parameters which can be set for any bucket type that you create:

This diagram shows how the values of these parameters dictate the vector clock pruning process: 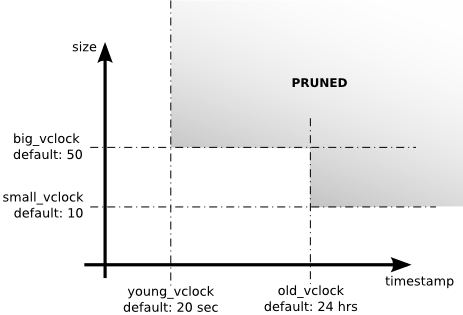