In Riak KV, MapReduce is the primary method for non-primary-key-based querying. Although useful for tasks such as batch processing jobs, MapReduce operations can be very computationally expensive to the extent that they can degrade performance in production clusters operating under load. Thus, we recommend running MapReduce operations in a controlled, rate-limited fashion and never for realtime querying purposes.

You can use MapReduce for things like: filtering documents by tags, counting words in documents, and extracting links to related data. In Riak KV, MapReduce is one method for querying that is not strictly based on key querying, alongside secondary indexes and search. MapReduce jobs can be submitted through the HTTP API or the Protocol Buffers API, although we strongly recommend using the Protocol Buffers API for performance reasons.

A MapReduce query begins when a client makes the request to Riak KV. The node that the client contacts to make the request becomes the coordinating node responsible for the MapReduce job. As described above, each job consists of a list of phases, where each phase is either a map or a reduce phase. The coordinating node uses the list of phases to route the object keys and the function that will operate over the objects stored in those keys and instruct the proper vnode to run that function over the right objects. 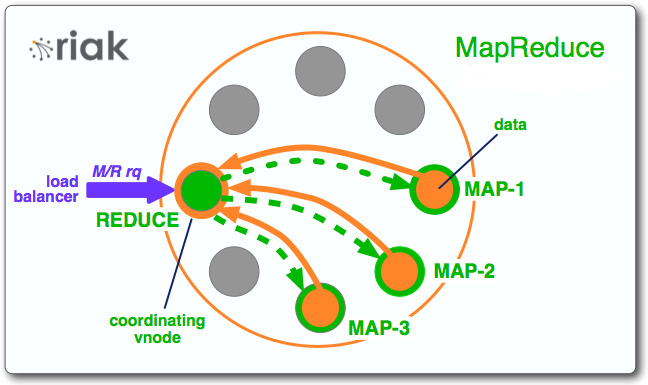 For the sake of simplicity, we’ll use curl in conjunction with Riak KV’s HTTP API to store the objects:

For interactive use, however, it’s not necessary to do so; instead, we can invoke the client library from the Erlang shell and define functions to send to Riak KV on the fly.

Next, to call ReFun on all keys in the training bucket, we can do the following in the Erlang shell.

Do not use this in a production environment; listing all keys to identify those in the training bucket is a very expensive process.

If your bucket is part of a bucket type, you would use the following:

For more detailed information on MapReduce queries in Riak KV, we recommend checking out our Advanced MapReduce guide.